Social Media Takeover: Does Anyone Talk in Person Anymore?

Posted by Tristan Barnum on Jun 02, 2011
While tinkering around the internet the other day, I stumbled upon an article from TechCrunch outlining the Geosocial Universe of 2011 and instantly thought, "This must be shared this with the world." So, here we are.


What is a Geosocial Universe you ask? It is the virtual landscape of social networks and how many registered users each network has. Similar to how our Earth's landscape changes, the Geosocial Universe changes as well. First it was MySpace, then Facebook... so what's next? New networks are cropping up all the time, and we're always looking for a different way to communicate. Call me a geek, but it's really interesting how many people are connected via social media - a member of Facebook alone has potential access to 629 million individuals! Even sites you and I may not have heard of have more subscribers than I ever imagined.

Check out these stats from TechCrunch to get a better idea:

For all you visual folks, take a look at this infograph that outlines the number active users on the top 19 social media sites. (P.S. I'm sure you can't miss that big blue bubble indicating 5.3 billion cell phone are used worldwide - that's 77% of the world's population!): 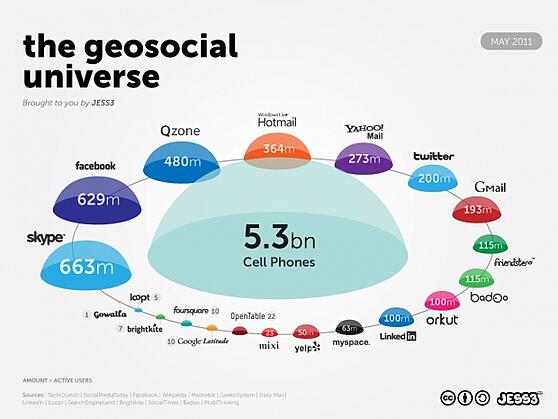 Photo Caption Credit: TechCruch and JESS3
Crazy stuff, huh? I can only imagine what these stats will be next year, or even six months from now. Are you registered on any, or maybe even all of these networks? If you fall into the latter, Voxox can help keep all your buddies, friends, fans, and followers organized by integrating them into one interface where you chat, Tweet, post, call, fax, update, email, and a ton of other cool things. According to Entrepreneur magazine (6/11 issue), "next to Skype’s limited, walled garden approach, Voxox is a cross-platform love fest." But don't take their word for it, try the "love fest" out for yourself!