It has been less than 150 years since the first telephone was invented. Personally, I can’t think of another device that has undergone more radical changes since its inception. If he were to look at an iPhone today, Alexander Graham Bell wouldn’t even recognize his invention,* let alone understand what a free calling app is!

Bell had a long road ahead getting buy-in from the public and patenting his invention. Fortunately for us, enlightened individuals kept it alive. Today telecommunications is one of the most exciting industries in the world. Let’s take a look at how far we’ve come. 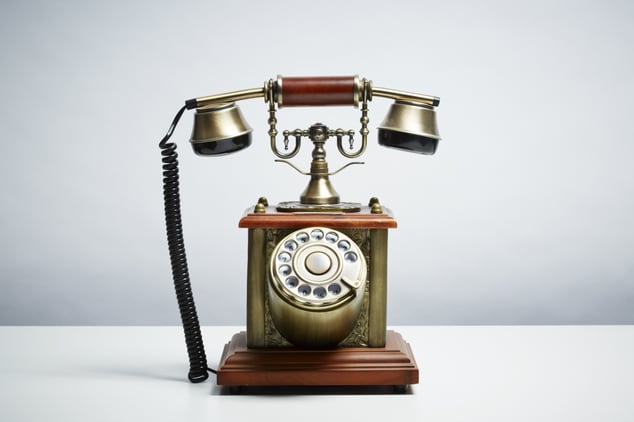 The first telephone consisted of a wooden frame, electrical coils, wires and screws. It was conceived out of a desire to improve on the telegraph, which had been in use for about 30 years but couldn’t transmit voice.

Early commercial phones were wall-mounted. A short cord to the mouthpiece allowed very limited movement. Bad news for people who pace and gesticulate wildly when on the phone.

The next big innovation was making the phone more portable. Sort of. An electrical connection was required for the cordless phone’s base and the handsets were enormously heavy. Remember those antennae?

People who have maintained landlines tend toward cordless models and antenna-free is now the norm.

To see a great example of an early mobile phone, re-watch Pretty Woman. In a short scene, Julia Roberts sets up a picnic as Richard Gere talks on his mobile (she soon relieves him of it). That thing was the size, shape and weight of a brick! It makes us laugh now, but back in 1990 it was considered pretty cool.

Plain mobile phones — “clamshell” designs — were soon replaced with feature phones. They were smaller and had several calling features included in the service. After experiencing the frustration of texting on a feature phone however, the public was ready for the next level and the smartphone was born.

Often referred to as the first smartphone ever, the IBM Simon Personal Communicator was introduced in 1992. Two years later it was available commercially for $899 with a (still standard) two-year contract. Although the price for a smartphone has dropped significantly since then, some people — hi, Mom! — haven’t yet moved on.

In 2007 Apple’s iPhone was introduced. The oft-imitated design, along with access to the Internet pushed the app market forward fast. Soon the iTunes Store was flooded with apps that could solve nearly every problem.

There’s an app for that

As connection speeds increase and free calling apps are making it easier, we will likely see video calling become more prevalent on smartphones. Cloud-based communication is on the rise, and devices are becoming less human-dependent. Truly these are exciting times for telecommunications.

* For the purposes of this blog, we will assume Alexander Graham Bell as the original inventor of the telephone. In recent decades there has been some dispute among the countrymen of other telephone patent holders, such as Antonio Meucci, as to who was the first to invent a working telephone.